Produced by Momina Durraid, Patakh Dey will be directed by Saife Hassan.

According to our sources, Patakh Day has managed to rope in our favorite actors. The Belapur Ki Dayan famed director, Saife Hassan has brought our favorite Ahsan Khan, Kubra Khan and Hania Amir together for this romantic, comedy and action film.

Along with that, it’s a Momina Durraid film for HUM TV, which means it’s definitely going to be an exciting experience.

Not really! The film will also feature Azaan Sami Khan on one of the leading roles! Yes, Adnan Sami Khan’s son is all set to make his debut with Patak Dey! On the other hand, Shamoon Abbasi has also joined the our cast to play the negative role. Yaaass!! Shamoon’s the villain.

In addition to this, veteran actors like Javed Sheikh, Bushra Ansari and Shafqat Cheema will be seen in the supporting roles.

Sources have revealed that the movie is going to be an action thriller, with a number of twisters for its viewers. Comedy and romance will be a cherry on top.

The film sounds really exciting and we are sure Saife Hassan with this amazing cast will definitely have a lot to show.

The film will be going on sets very soon and we don’t have further details about its release date. But we, for sure, will have it all soon, so stay tuned! 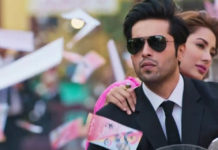