Alongside Sohai Ali Abro and Osman Khalid Butt, Pasha will be playing a lead role in the serial.

Mansha Pasha is all set to play her first negative role in her upcoming drama serial Surkh Chandni.

Surkh Chandni is based on the socially-sensitive issue of the rising number of acid attacks across the country. The idea is to raise awareness on this issue.

“My character is somebody who causes an acid attack. It also sheds light on the fact that men and women can both equally be the reason behind the acid attacks. The reason I took up this particular project was because I haven’t done anything negative as such in my entire career and this wasn’t just a typical negative character,” said Pasha according to the press release.

“I think the overall drama has been so violent both emotionally and physically. The character has been challenging for me because getting into the mindset of such a person and understanding the motivation behind their action is tough,” Pasha added.

The drama draws our attention towards the life of an acid victim. The pain she goes through and the struggle she does to stand up against the injustice done.

The drama is written by Asma Nabeel and directed by Shahid Shafaat.

We are really excited to see Mansha Pasha in her first negative role. Share your thoughts in the comments below. 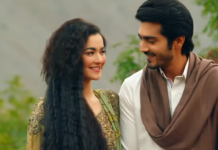